When I was young, I remember my mom reading Love You Forever by Robert Munsch.  It was one of our favorites that we requested frequently.  As a young child I remember my mom getting emotional while reading the book, but I never quite understood.  Even today, some *cough* 30 years later, she still concludes each phone conversation by saying "love you forever."

At the beginning of our TTC journey I started stockpiling a bunch of things I wanted/needed for a future baby.  I bought this book and tucked it away in the "future baby" box.  Rereading the book as an adult made me understand why my mom got emotional reading the book when I was a child.

When I was going through infertility I couldn't bear to think about this book.  It portrayed the deep bond between a mother and her child, a dream that I was beginning to think would never come true for me.  So it stayed tucked away in the box and there it stays.

Through the last year of so I've purged most of the contents of my "future baby box."  No sense in keeping it around since I'll never be able to use it, and I can't bear the thought of giving it to someone I know.  The book remains in the box, along with a few other odds and ends that I can't bear to get rid of yet.  Now I tear up just thinking about it.  I don't think of it often, but tonight I did.

Tonight I was reminded of the book when I read this article.  As it turns out, there is more to this book than meets the eye.  His reason for writing the book makes me simultaneously love it more and cry that much harder.  I reread the book.  I cried.  Mr. Munsch wrote a beautiful book that speaks of great love, but he knows this great loss too.

I think I'll always love this book.  It holds many positive memories.  But I think it will always be a painful one too.  I think that Mr. Munsch understands.
Posted by BentNotBroken at 10:41 PM 9 comments:

Infertility at the urgent care

On Friday I had a reason to visit my local Urgent Care as a result of my first homeowner related injury (well, technically first, second, and third injuries).  Don't worry....I'm fine.  Nothing a good cleaning, some dermabond to close up the wounds, and bandages didn't fix.  Since my injuries were construction related and I was due for it, I ended up getting a Tetanus shot too.

Here in the US there is a strong anti-vaccination movement (which completely blows my mind, but that's a different rant for a different day) and as a result doctors frequently feel the need to "sell" people on vaccinations.  I'm not a person that needs to be convinced.  If there is a shot that can protect me against Tetanus, Diphtheria, Pertussis, Measles, Mumps, Rubella, Polio, Smallpox, etc., all I need to know is if you need to give it in my arm or my butt.  I value not acquiring diseases that are a) preventable and b) people die from.

The doctor was a woman that I guessed to be around my age and who appeared to be pregnant.  She started in on her sales pitch for the TDaP vaccination.  I told her that she didn't need to sell me on it and that if I was due for it that I wanted it.  She continued with the sales pitch anyway.  Her two main points were that all women who are pregnant or planning to become pregnant should have the shot and that anyone with regular contact with infants and children too young to get the vaccination should have it.  Both of these things are true, but I didn't need the sales pitch.  Again, I indicated that I wanted the shot.  She continued with "someday you'll want to get your IUD removed and start a family so you really should consider getting it."

At this point I was exhausted, covered in dust and sweat (from sanding floors), bleeding from three different extremities, and irritated because I'd been there almost two hours at that point.  Her suggestion that someday I might want to start my own family did not go over well.

Tears welled up in my eyes.  I managed to get out "please shut up and give me the damn shot" Tears were streaming down my face at this point and it took everything I had to hold it together.  She asked what she said that offended me.  I told her that she should never make assumptions about people and that she should never take fertility for granted.  I don't know why it got to me, but it did, and three days later I'm still thinking about it, and it still makes me want to cry.


Another reminder that I'm different, and this one was (and still is) a painful one.
Posted by BentNotBroken at 9:20 PM 16 comments:

We did it!  We signed all of the papers and bought our house on Tuesday morning.  It wasn't an easy process and the deal almost fell apart several times.  But thanks to our amazing agent and his hard work, it's over and it's ours.  We are so thankful that this worked out and excited to actually move in! 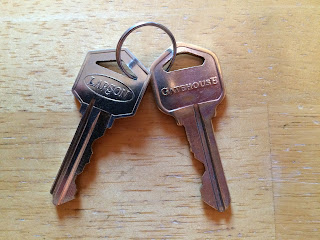 Now the hard work begins.  We've spent the past few days pulling up carpet and sanding the original hardwood floors.  Thankfully they are beautiful and not too damaged.  Once the floors are done, we're going to paint the whole house.  We'll move in close to the end of the month.  We can't wait to see the finished product!
Posted by BentNotBroken at 7:22 AM 16 comments:

I've always been one of those people who has treated infertility as a private matter in my day to day life.  I speak openly about it online, but that's mainly because I can do it under a pseudonym and among a community of women who understand and who support me unconditionally.  Real life, well, that's different.  I've never felt comfortable talking about it publicly.  Infertility really made me lose a lot of faith in people and frankly I didn't feel strong enough to deal with the stupid.

With three sisters having babies in the span of one year I've been getting a lot of questions about when we're going to have a baby and/or "you're next" comments.  We're also buying a house and our fifth wedding anniversary is later this month.  It's not unreasonable to expect that the family planning line of questioning would only escalate.  So I decided to do something about it.  Fight fire with fire, if you will.  I'm in a good place for the most part and am feeling pretty strong most of the time.  It was the right time.

Last week was National Infertility Awareness Week, and while I have never been affiliated with Resolve in any way (and actually have quite a few ethical qualms about their practices), I do like the idea of raising awareness about infertility.  I also really embraced Justine's #MoreThan1in8 campaign because I felt like that simple hashtag conveyed exactly what I wanted to.

So I outed myself.  Publicly.  On Facebook.  And by default I outed Hubs too, with his full support.

I shared what I felt comfortable sharing, how I wanted to share it, and on my terms.
I had low expectations.  Like really low.  I posted what I did fully prepared for a fight and unfriending spree.  I was fully prepared for misunderstanding, false assumptions, the "never give up" message, and "have you tried _________."  I couldn't even look at Facebook for hours after I posted about it.  I was sick to my stomach.  I wasn't sure that I wanted to see.  So I went to work and tried not to think about it.

But while I was avoiding Facebook the texts, private messages, and emails started to roll in.  I logged on.  More of the same.  I was shocked.  Overwhelmed.  People responded in a ways that I never could have predicted.  With understanding.  With love.  With solidarity.  With empathy.  With compassion.  With stories of their own infertility journey.  I was (and still am speechless).

Over the last week and a half I've had honest, open, meaningful conversations about infertility with people outside of the infertility community.  I honestly didn't anticipate this.  A bit of my faith in humanity has been restored.

But probably the best and most unanticipated consequence outing myself doesn't even involve me, it involves Hubs.  The other night his phone rang.  It was one of his oldest friends.  He went upstairs to talk.  When he came downstairs almost an hour later he said that it was a relief to finally talk to someone who understood.  It turned out that his friend and his friend's wife went through almost the same exact thing as we did (though their journey is not finished because they decided to pursue adoption).  Neither one of them knew the other was going through it too.  So they talked.  They shared.  They supported one another.  He's been going through this without a support system outside of me, and I think that he's felt that it's his responsibility to be strong for me.  Now he has an ally.  Somebody that he doesn't have to be strong with.

Never in a million years did I imagine that so many conversations would come of a silly little post.  I am still overwhelmed by and grateful for how the post was received.  I guess the moral of the story is that sometimes people can surprise you in the best possible ways.  It feels good to be out.